Reflecting on ideas to create an artwork related to the fury, the word “bonzo” came to my mind, and I discovered that it hides an incredible story.

The expression has its origin in the wave of suicides of Buddhist monks, which occurred in the early 60s as a protest against the government of South Vietnam. The first was Thich Quang Duc, a Vietnamese Buddhist monk who committed suicide by burning himself in a busy area of Saigon on June 11, 1963.

Thich Quang Duc protested the oppression of the Vietnamese suffered at the hands of President Ngo Dinh Diem. The monk remained completely motionless while it was consumed by the flames, without emitting any type of signal that warned of his pain.

After his death, and according to tradition, the community incinerated his remains, but his heart remained intact. Thus, it was considered sacred and was placed under the care of the National Bank of Vietnam.

This artwork is part of an experimental project of conceptual portraits carried out with the collaboration of photo artist Pablo Peña, and on which we have been working for several years.

This artwork belongs to Human Feelings collection. It is an open series of conceptual portraits.

It is a work that combines collage and digital edition of the image through several filters and digital actions.

Many people would say that visual art is any kind of art, and that this kind of pieces should be included in digital art or new media. But in our method of work, we use photography, body painting, creative lighting and digital postproduction among other elements, so we like to run away from the conventional tags and call it visual art. 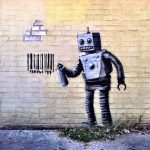