The main stars of the cast are Walter Pidgeon, Anne Francis and Leslie Nielsen.

It is the first appearance of Robby, the robot, which is a popular fictional character who made numerous appearances in science fiction films and television programs from 1956 onwards.

This was the first science fiction movie with a millionaire budget. That’s why the movie has a good number of special effects.

The plot is a recreation of Shakespeare’s play The Tempest, set in the space age. The authors themselves recognized it after the premiere of the film.

Ready for a long journey 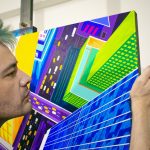