This piece belongs to the Banality series and was exhibited that year in New York, Chicago and Cologne.

It consists of a score of sculptural figures that exalt, from a baroque aesthetic, the so-called popular culture.

Each of the pieces was executed by a team of craftsmen whose signature can be seen on the surface of the works, while Koons reserved a more discreet place and only stamped his own at its base.

Before entering the Banality series, he visited several European workshops specialized in religious wood carvings and in the manufacture of decorative porcelain statuettes.

Koons commissioned them to create a series of sculptures on such iconic themes of contemporary society such as Michael Jackson with his chimpanzee Bubbles -which adopts a pyramidal composition reminiscent of Michelangelo’s Pieta- and others that refer to commercial greeting cards, gift objects from airport stores or reminiscent of religious iconography. 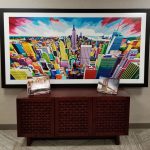 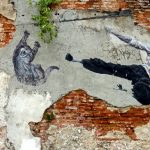